In July 2015, Paxful was founded by Artur Schaback and Ray Youssef as a payment processing firm serving merchants operating businesses from brick and mortar premises in New York City.

In 2016, the company transitioned to a cryptocurrency P2P platform which allowed users to buy or sell bitcoins.

In 2017, the company focused its efforts on improving its customer services to give them the best experience in online bitcoin trading.

By the end of 2018, the company had expanded to Hong Kong, New York, Venezuela, South Africa, and the Philippines, and had seen over $880 million worth of bitcoin traded on the platform.

In 2019, Paxful continued to popularize its platform by holding different workshops in countries such as South Africa, Colombia, Kenya, Mexico, and Hong Kong.

In early 2019, they partnered with Jumio to quicken the user verification process.

The company had seen the potential for growth in Africa and was determined to reach the vast majority of underbanked Africans. By the end of 2019, Africa accounted for the biggest percentage in trade volumes for Paxful.

In March 2020, the company introduced a dark mode on its platform. It also launched a website for its peer-to-peer program and added gold as a payment method.

In May 2020, the company introduced PaxBot, a Telegram bot that aims to help customers get notifications on the best existing offers and the latest offers.

On May 11, Paxful announced that multi-crypto wallet Infinito was incorporating its platform to allow Infinito wallet owners to buy bitcoin without paying additional fees to Paxful.

Beginning from May 2020, in the wake of the COVID-19 pandemic, Paxful partnered with Shining Hope for Communities which provided food aid, increased access to screening, clean water, and sanitation to slum dwellers in Nairobi.

On June 15, 2020, the company announced it had partnered with OKEx to allow users to pay for their bitcoins using more than 160 currencies from around the world, such as Indian Rupee, Euro, and Thai baht.

In July 2020, Paxful turned 5. To celebrate this milestone, the company introduced quizzes and storytelling on its social media handles where winners would walk away with prizes in the form of bitcoin.

On August 3, 2020, Paxful lowered the minimum threshold for user verification to $1,000 in keeping with the company’s policy to encourage trustworthiness in peer-to-peer transactions.

Starting from August 2020, buyers and vendors will set their working hours on the platform. This feature aims to help users see when a vendor or seller is available for a deal. It takes into consideration that users are from different time zones and may not be online at the same time.

On Sept 3, 2020, Paxful expanded support beyond bitcoin and added support for Tether (USDT) stablecoin, as it plays an important role in the emerging markets. Users can convert their Bitcoin holdings to USDT as it does not suffer from volatility. 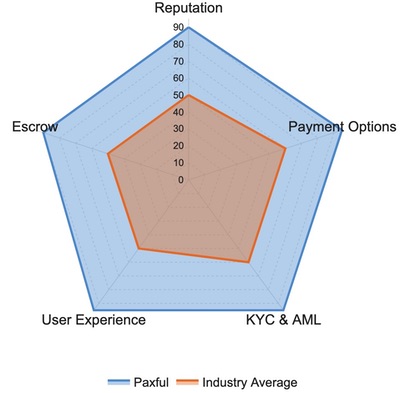